Valley Yellow Violet is one of three confusing yellow violets.

size and color. White mats of Hood’s Phlox (P. hoodii) are still flowering on the dry slopes. Its taller, slightly pink, 6-8″ cousin Longleaf Phlox (Phlox longifolia) is coming into its own along

Waterleaf – look under the leaves!

roadsides. In relatively moist spots, look for fuzzy heads of white hiding beneath the lobed leaves of Waterleaf (Hdyrophyllum captitatum).
In especially warm locations, Lupine is already sending spires of blue pea-flowers above its palmate leaves. Wild Buckwheats (Eriogonum spp) are forming heads and pinwheels of white to yellow blooms. Yet, as you go north in Grand Teton National Park, where the final patches of snow have just melted, you may still see the early spring flowers of Spring Beauty (Claytonia lanceolata), dangling Yellowbells (Fritillaria pudica), and dramatic pink Shooting Stars (Dodocatheon conjugens). If you are lucky you may see a bumblebee clinging to the tip of the Shooting Star, The bee vibrates its wings to a specific frequency, thereby releasing pollen onto its belly in the act

These are just a few pleasures of a drive with short explorations on foot.

Let us know where you are finding flowers! 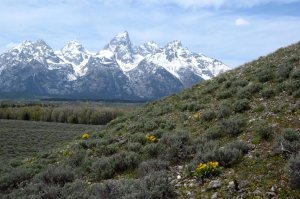 Wildflowers on a sage slope overlooking the Grand Tetons May 2013