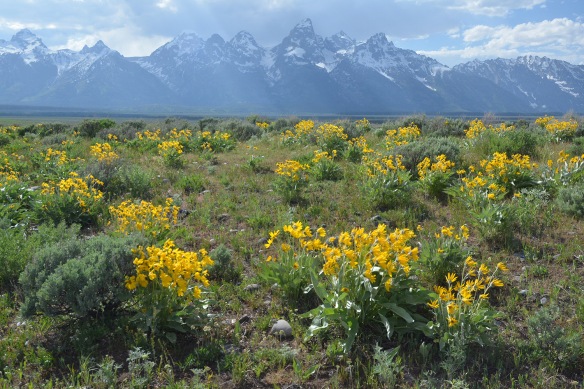 The weather has gone from summer back to spring (winter) today, June 14.  The flowers have popped throughout the valley with the heat of the past 10 days.  With little rain this spring, there is no time to lose to enjoy the riotous color and heady fragrances at lower elevations in the valley.  Fortunately, while flowers may be fading in the southern end of Jackson Hole, they are still fresh in the northern end. 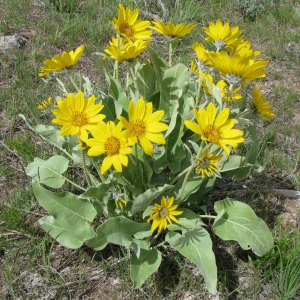 Balsamroot and the look-alike-but-not-quite mules-ears are in full yellow glory.

Balsamroot (Balsamorhiza sagittata) has large arrow-shaped leaves with a grayish cast, all arising from the base.  Sun-yellow flowers stand well above the foliage.  Balsamroot is growing all along the sage flats and up the open hillsides.  Antelope Flats and the top of Signal Mountain feature impressive shows. 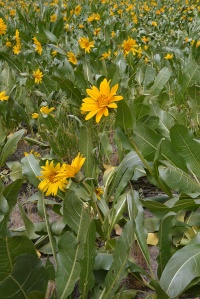 Mules-ear wyethia (Wyethia amplexicaulis) has deep green leaves shaped like huge mules ears, alternating up the 1-2’ stems (taller in wetter springs).  The 3-4” flowers are a deeper orange-yellow than balsamroot.  It is found in slightly moist spots, such as near the corner of Antelope Flats Road and the highway and along Cattleman’s Road just west of Oxbow Bend.

Amidst sage flats and into forest edges are many common favorites: Pink sticky geraniums, lavender to white long-leaved phlox, red scarlet gilia, blue lupines, and yellow modoc hawksbeard are showing their colors amidst the sunny balsamroot. Spikes of cream death camas grow intermittently along Gros Ventre Road south of Blacktail Butte, and patches of pale yellow paintbrush (Castilleja pilosa var. longespica) cluster along the northeastern side of the loop.  (Scroll down for photos.) 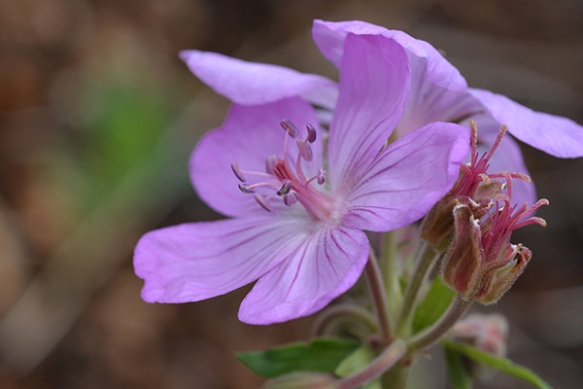 Sticky Geranium – Geranium viscosissimum – The wide open, pink flowers with lines form landing pads for many kinds of pollinators eager for  pollen and nectar found in the center of the flower. 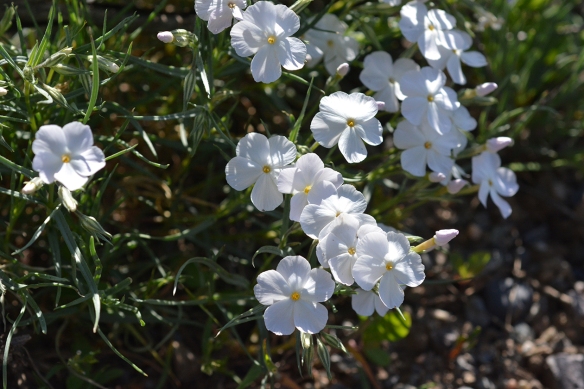 Longleaved Phlox – Phlox longifolia – has variable colors from pink to lavender to white. Note the petals twist in bud.  Flowers are extremely fragrant! 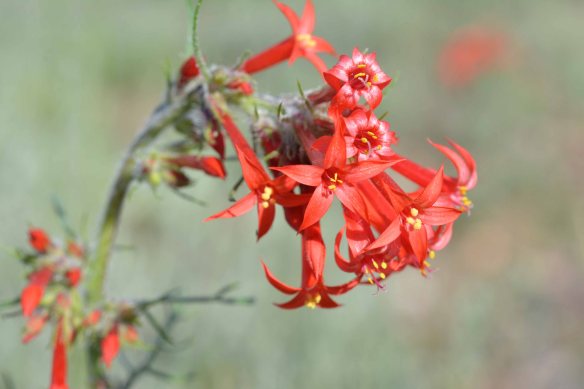 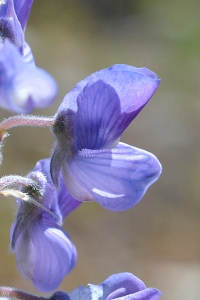 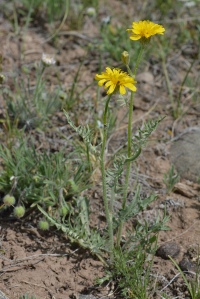 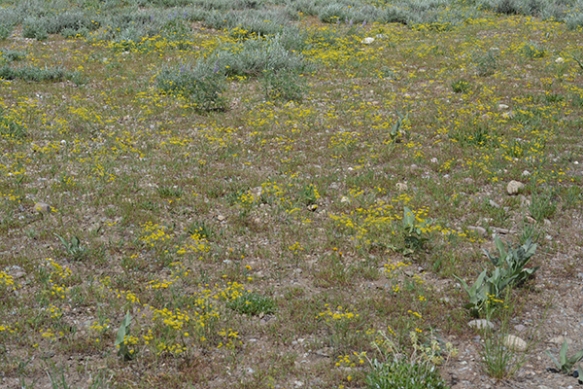 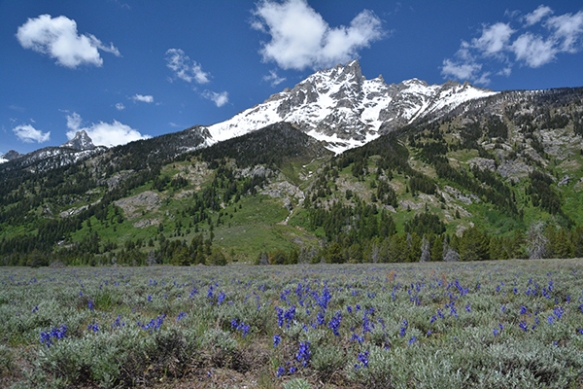 Lambs-tongue Groundsel – Senecio integerrimus – is common in sage flats. Look for the even- sized involucral bracts around the flower heads and the cobwebby hairs on the stem and variable leaves. 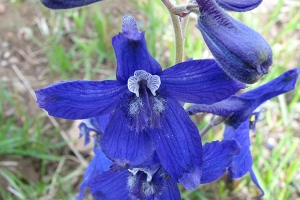 Nuttall’s Larkspur – Delphinium nuttallianum – has deep blue, complex flowers that bar many but the strongest and smartest pollinators, such as bumblebees. 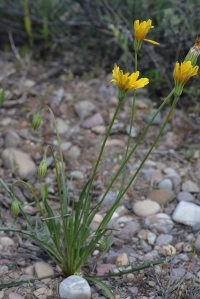 Nodding Microseries – Microseries nutans – looks a bit like a dandelion or an agrostis, but the buds droop and the pappus (fluff) is feathered. Leaves are mostly, but not, all basal and narrow. 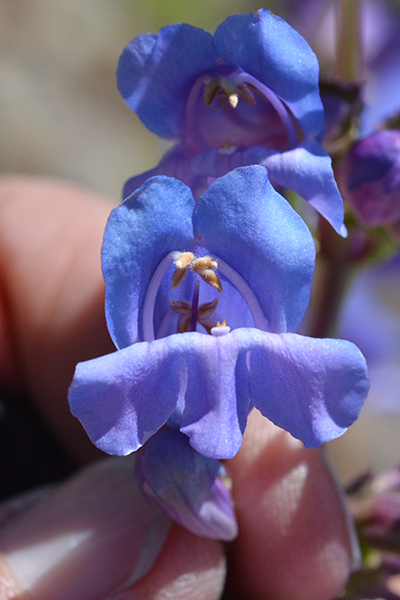 Blue penstemon – Penstemon cyaneus – Penstemon identification relies on hairiness of plants and even anthers! The anthers here are hairy on the back, slit open, and are held at an angle. The flowers and stem are smooth.

Shrubs of antelopebrush (also called bitterbrush) perfume the sage flats with their small yellow flowers. Serviceberry has short clusters of five-petaled flowers while black chokecherry has long wands of flowers that wave along the edges of moister hillsides, such as along the Moose-Wilson Road and Old Pass Road in the south and Oxbow Bend in the north end of the park. These two white-flowering shrubs are members of the rose family and will have berries important for bears, birds, and other wildlife come late summer into fall. 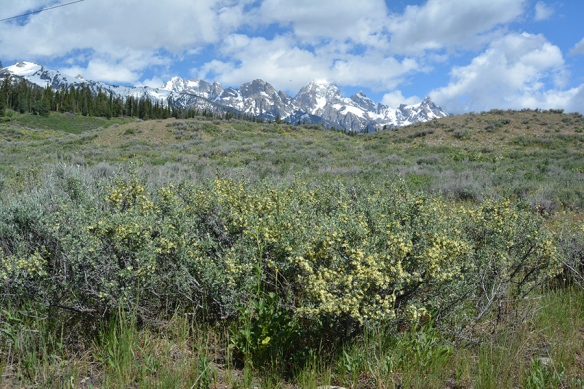 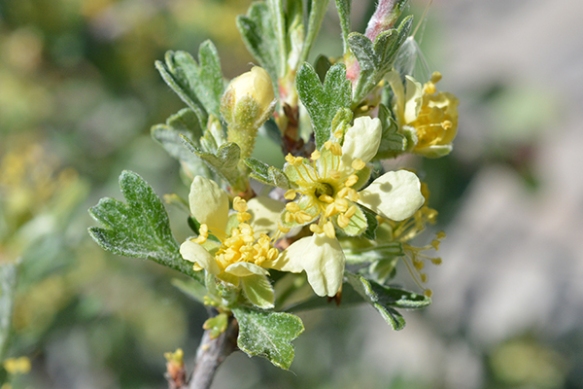 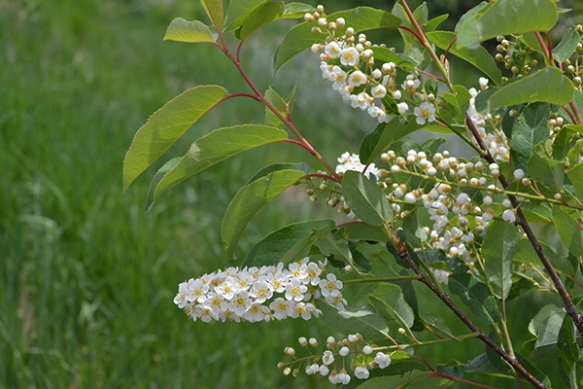 Chokecherry – Prunus virginiana – has long wands of flowers attractive to many pollinators. Fruits are vital to wildlife. 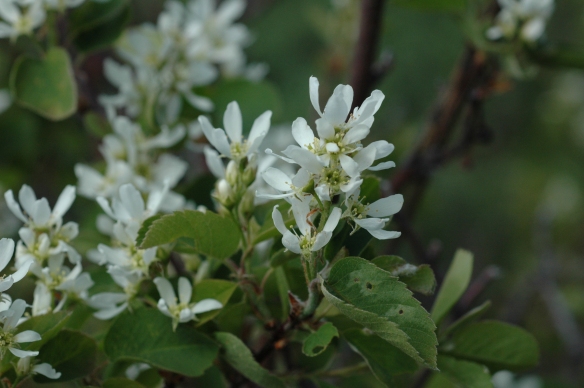 Serviceberry – Amelanchier alnifolia – is in the rose family and produces delicious fruits for people and wildlife.

Tent caterpillars will soon cocoon and metamorphose into moths.

You may notice the tent caterpillars defoliating chokecherry.  They build their silken tents where they capture the sun on spring mornings, warming the bodies of these industrious, spinning creatures.  Soon they will cocoon individually and after a couple of weeks become moths.  The caterpillars are protein bars for birds.

Flat Creek Road through the north end of the National Elk Refuge features early Indian paintbrushes, one brilliant red (Castilleja chromosa) the other yellow (Castilleja flava var. rustica), which dot the dry ground.   Low mats of pussytoes (Antennaria microphylla) and daisies (Erigeron spp.) spread through yellow patches of arnica (Arnica sororia, A. longifolia), stemless goldenweed (Stenotus acaulis) and a clump or two of blue humble penstemon (Penstemon humilis) rise along the hills to the north. Strong winds are challenging to their insect pollinators.  However, grasses are waving their miniature flower heads for the breeze to facilitate pollination.  Soon sulphur buckwheat will add soft yellow hues to the scene.  The fuzzy fruits of Pursh’s Milkvetch can be found lying on gravelly soils. 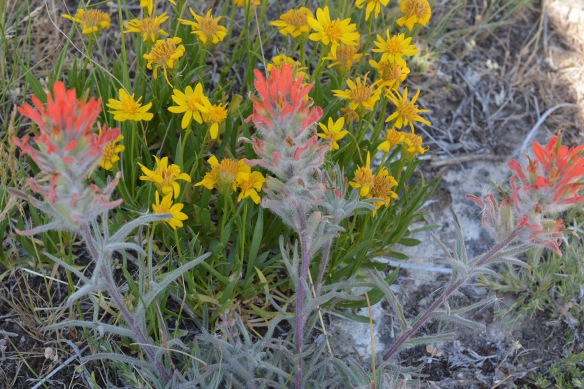 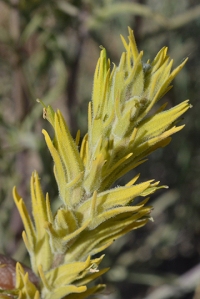 Yellow Indian Paintbrush – Castelleja flava var. rustica – one of several yellow paintbrushes. The details are in the flower proportions and bract shape, as well as hairs and color. Not easy to ID. 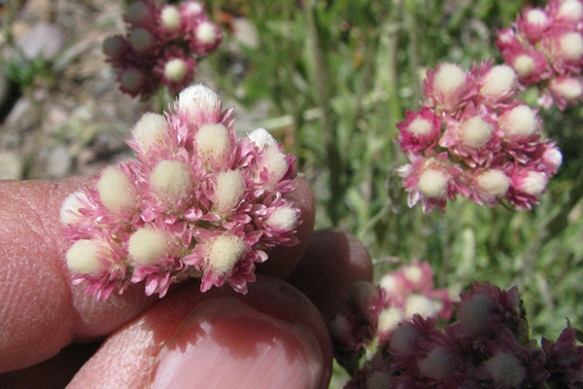 Sulphur Buckwheat – Eriogonum umbellatum – will soon be blooming throughout the valley. 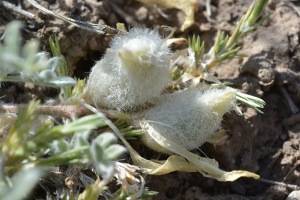 And finally, blue camas and white mule’s ears are in full spender in a wetmeadow at the north end of the park. 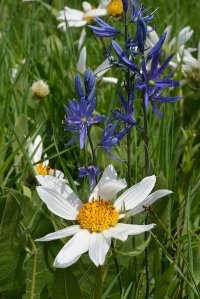 These are just a few of the wildflowers to see right now–coming and going–this mid June.

Please let us know what your are finding.

White Mules-ears and Blue Camas in a wet meadow.