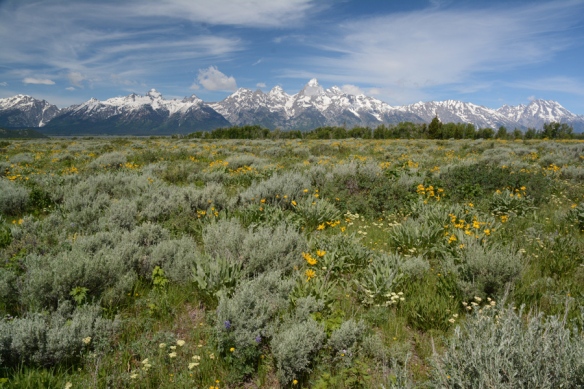 Many of us have been out frantically trying to keep up with the blooming flowers.  The warm weather–in the 70s+–has keep flowers going and coming in the sagebrush habitat in Jackson Hole.  Late spring favorites of Nuttall’s Larkspur, Arrowleaf Balsamroot, and Western Groundsel are fading in the southern end of Grand Teton National Park, but new favorites are unfurling fast.

Not only are we plant lovers looking for wildflowers, but so are pollinators–bees, flies, butterflies, and hummingbirds.  They appear more numerous this week than even a week ago.  Their increased presence is important as most (but not all–such as dandelions and some pussytoes) flowers need to be pollinated to set seeds for the next generation.

Below are some photos to inspire botanical forays.  Flowers are easily seen throughout Antelope Flats east Highwat 89, and Bradley-Taggart Lake, Lupine Meadows, and soon String Lake Trails along the inner park poad.  Similar flowers are also blooming in open areas along Cache and Fall Creeks and the beginning of the Ski Lake Trail.

Two shrubs are blooming throughout much of the valley: 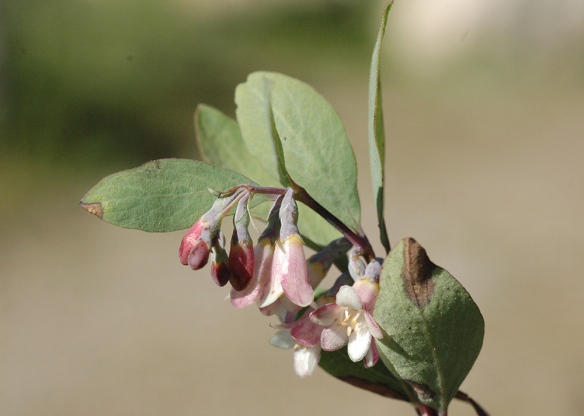 Snowberry – Symphiocarpus oreophilus – a 2-3 foot shrub with opposite oval leaves, is blooming in both shade and sun.  The pink flowers will produce white berries.

Wildflowers that are particularly showy include Sulphur Buckwheat, two species  — yes two — of lupine, and tall wands of Scarlet Gilia. 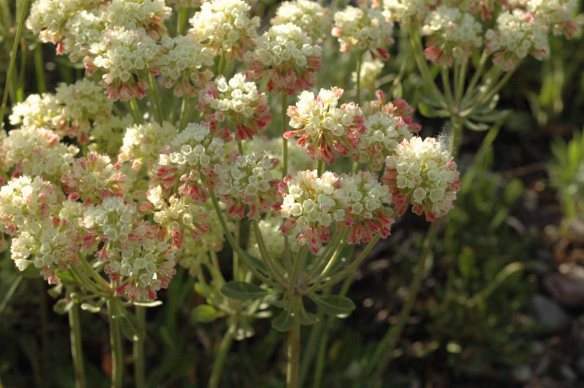 Sulphur Buckwheat – Eriogonum umbellatum – grows mats of small oval leaves which are overshadowed by clouds of creamy yellow flowers, often tinged with pink.  The flower clusters have a collar or whorl of leaves under the umbrella-like flower stalks. 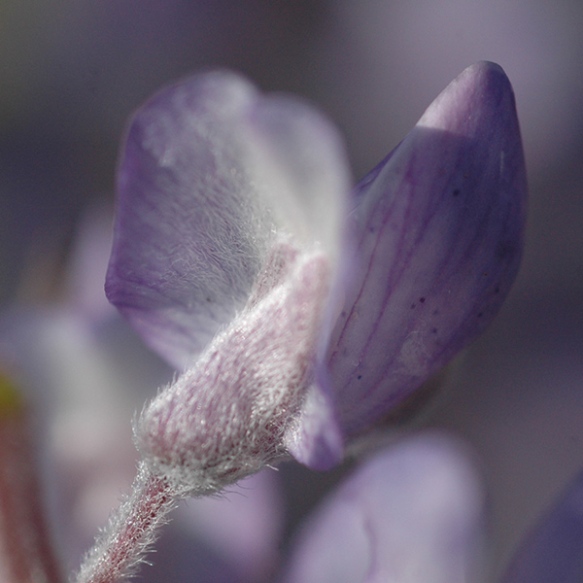 Silky Lupine – Lupinus sericeous – is the typical lupine of sage flats.  It is related to our garden peas. The familiar looking flowers have a very hairy “banner”–back of upper petal–and hairy stems and leaves.  Later they will have very hairy pods–but don’t eat the seeds: they are poisonous.

Silky Lupine – Lupinus sericeus – has fine silvery hairs covering most of the 2’-2.5’ plants.  All lupine leaves are “palmately divided”: several leaflets are connected in the center and then attached to the petiole –“palmate” like fingers off the palm of your hand. The hairs help keep the plants from drying out in the hot flats. They reflecting the light and maintain humidity close to the leaf surface to prevent too much transpiration of water from the leaves during the hot days.

Compared to silkly Lupine, meadow lupine – Lupinus polyphyllus – has larger flowers and the banner (the upper petal) is smooth on the back and reflexed at a wider angle to the lower two petals. This species tends to grow in moister open areas, such as along the cobbled creeks and river edges, but sometimes it is found in pockets of sage clad flats or hillside.

Hummingbirds are attracted to the red tubular flowers of Scarlet Gilia – Ipomopsis aggregata.  Seeing red (many insects can’t), the bird can hover, insert its long beak, and extend its tongue to lap (not suck) up nectar deep inside the tough tube of petals.  In the process, the bird’s head gets dusted with pollen grains which it carries onto the next flower.  There, its forehead gets bonked by the extended stigma of the ready flower.  Thus the flower is pollinated! Of course this happens at the lightning speed of the flying hummingbird.

Tucked in between the larger plants are a few others such as very fragant Long-leaved Phlox and the confusing False Dandelions and Hawksbeards are out now.  They each have their ways of accomodating pollinators.

Long-leaved phlox – Phlox longifolia – seems to peer up from the trail.  Unlike its cushiony early-spring relatives, this species has 10-12″-long stems and 2-3″ long narrow opposite leaves.

The beguiling fragrance of Long-leaved Phlox – Phlox longifolia – attracts small flies, bee flies, and butterflies to the bluish to pink 5-petaled flowers. Only the insects with just the right length mouthparts can reach down the long tube to the nectar deep within, and in the meantime the flower is pollinated. 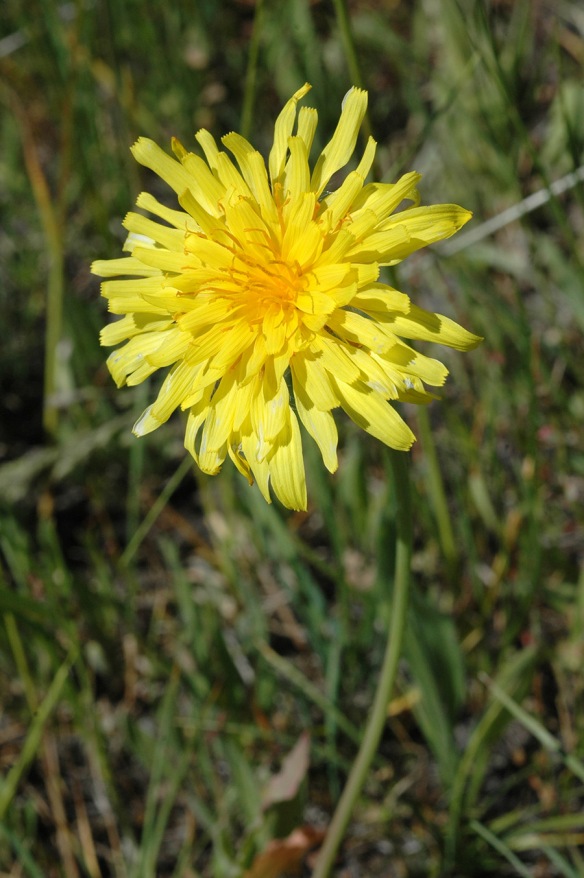 Mountain Dandelion – Agoseris glauca – looks very much like a dandelion, but look closely….The green bracts that surround the flower heads are different.  In the dandelion – Taraxacum officionale – the outer bracts bend backward (left below), vs. their standing up on the Mountain Dandelion (right below)

Note the two rows of bracts in Dandelions: the outer pair fold down, the inner pair are upright. Bracts are very helpful in ID of composite flowers. 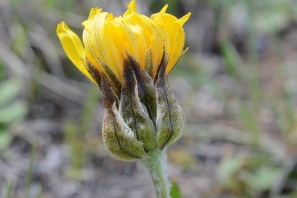 Mountain Dandelions have tidy, upward pointing bracts around each flower head. Some bracts can be hairy or smooth, depending on variety.

Also the seeds are different than the weedy dandelion as they do not have rough ribs with nubs on them.  The finely ribbed fruits of False Dandelion are carried off by white parachutes of bristles pappus. (Yes, very like dandelions!)  There are 3 subspecies of mountain dandelions, for those hard-core botanists who wish to pursue the differences.

Hawksbeards – Crepis sp. – are robust plants of the sageflats. The leaves bunch at the base but also grow up the branching 8-16+” stems (unlike mountain or common dandelions). The leaves are often sword-shaped and variably pinnately (branching like a feather), toothed, lobed, or dissected.  The flower heads can have a few to many many individual flowers.  It is easy to see 3-4 species blooming in the same area.

Unlike some of the complicated flowers shown above, Sticky Geranium – Geranium viscosissimum – is wide open to pollinators.  The five petals have lines directing insects into the center of the flower where the nectar lies hidden (nectar guides).  Geraniums seem to be flowering everywhere now — sage-covered hillsides to aspen woodlands.  Sticky geraniums are obviously adaptable and persistent.

A couple of other flowers may go unseen in the sage-flat habitats either because they appear a bit wispy or are short and pudgy.  They are both remarkably hardy to dry sites.

In mostly dry locations, delicate Ballhead Sandwort – Eremogone congesta – is abundantly scattered in delicate clumps among more robust plants. Sandwort is in the same family as florist carnations and garden pinks, sporting opposite needle-like leaves joined together in a bit of a bump on the stem. ‘Congesta’ in the botanical name refers to several small white flowers grouped tightly together in a head at the top of each wiry stem.

The bright yellow, star-shaped flowers on 6″ stems of Lance-leaved Stonecrops are beginning to show up.  If pollinated, flowers will produce seed that can scatter widely from beneath the parent plant.  But what happens if the pollinator doesn’t visit….? 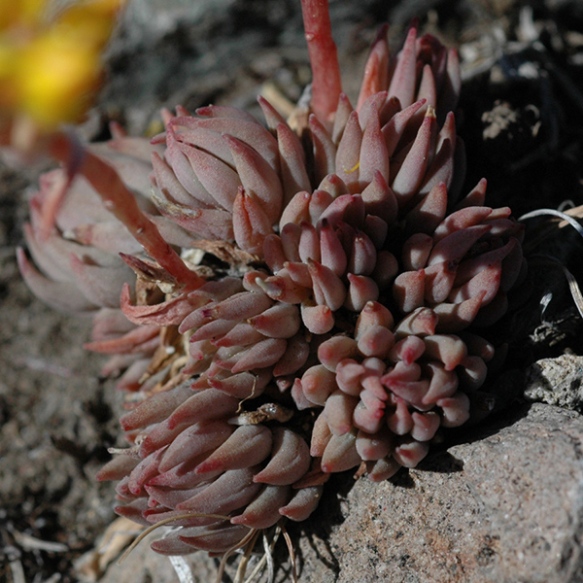 If knocked off the plant, the small 1/4-1/2″ succulent leaves, bundled at the base of flower stalks, can grow roots and start whole new plants, which is one way stonecrops can move around the neighborhood. Lance-leaved Stonecrop – Sedum lanceolatum – is related to hens and chicks, popular garden and house plants.

Also scattered midway up the inner park road, are two species of the Parsely Family, that you may notice as they can be quite showy in spots.  They were blooming around the Sawmill pond overlook along Moose-Wilson Road about a week or more ago.

Two members of the Parsley or Apiaceae Family, (previously the Umbelliferae family because of their characteristic arrangement of tiny flower on the tips of umbrella-like petioles) are in bloom.  One is a delicate, white, 2-foot tall relative of the Common Yampah – Boland Yampah – Perideridia bolanderi.  The other is plant growing below is the a sharp-yellow Wyeth Biscuitroot – Lomatium ambiguum.  This latter is forming tangy seeds.

There are many more flowers out there, but two more species might fascinate botany nerds, who dive into the details.

The many pussytoes – Antennaria species — are confusing to ID.  Partly this is because they can set seeds without cross pollination, and in the process double the chromosome numbers in their off-spring.  Some species also just plain hybridize with close relatives.  These “complexes” create overlapping, confounding identification features.  Upon close examination, this species was clearly Antennaria luzuloides or Rush Pussytoes. 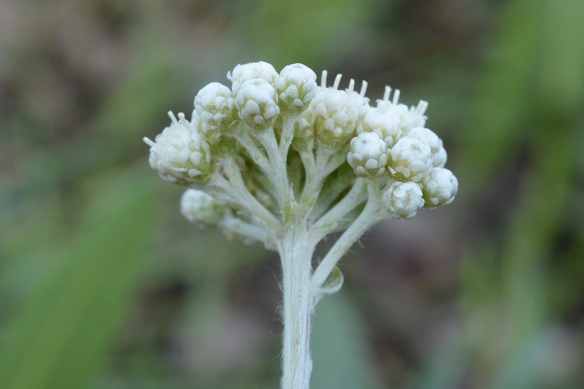 Besides the fairly large leaves going up the stem (vs only forming a close mat of tiny leaves at the base), the bracts around the flower heads of Rush Pussytoes — Antennaria luzuloides – are smooth, not fuzzy as is often the case in pussy-toes.  These bracts are also light green to white, with no black.

Hiding under the colorful wildflowers of the moment, on 6″ stalks, these 1″ balls reminiscent of dandelions, might catch the eye.  Look closely….

These are heads of Nodding microseris – Microseris nutans.  Flower heads of yellow, dandelion- like flowers have formed fruits, one per former flower.  The pappus that will carry the fruit away is delicately formed.  The base of each pappus bristle broadens out, catching the sunlight like a drop of water.  Spring is fleeting.

There are many more flowers to see.  The Mulesears on Munger Mountain–Wally’s World Trail, accessed off Fall Creek Road, south of Wilson, is at peak right along with many of the flowers described above and more.

We hope to have the next post show what to see on some of these open ridges and aspen groves around Jackson Hole.

P.S. We always appreciate comments, particularly notice of any errors.  We strive to be accurate in our identification and descriptions.