Forest fires can appear devastating at first, but for the most part nature has its systems for resilience. Depending on how hot the fire was and what plants were present both above and below ground and nearby, vegetation will return in its own due course. In some cases, plants sprout that have not been noticed in years, and indeed are triggered to flower after the heat of the moment. Others take advantage of the open ground and fly in with fresh seeds. Still others have stored seed until the magic moment. Wildlife also takes advantage of the changes.

Lodgepole Pine – Pinus contorta – is a fire-adapted species. While the thin-barked trees are killed, thick “serotinous” cones have held seeds for years.

Their cones have thick scales with spine tips which protect the seeds inside from mauraders and weather for years.  When a fire comes through, the resin that has sealed the scales shut melts, and cone scales open wide, releasing winged seeds upon the wind. The delicate embryos fall onto newly exposed soil, which may be enhanced by ash, and quickly germinate. Ash often contains recycled nutrients and retains warmth which helps the seeds grow.  Seeds germinate quickly, giving them a headstart among competing plants.  Pines in fact need sun to grow well. A truly fire adapated species!

Mountain Mallow – Illiamna rivularis – often appears in great numbers after a burn.  Affected by extreme heat, their thick seed coats crack, enabling seeds to imbibe water and sprout. These seeds may have lain buried for decades in the soil waiting for such a moment.

Due to a prescribed burn south of Hoback, the slopes along the trail up Palmer Creek are now covered with 4-5’ flowering Mountain Mallow plants (photo above taken 7.13.18). Soon fruits, which look like peeled hairy tangerines, will split to release seeds for the next generation decades in the future (photo below). 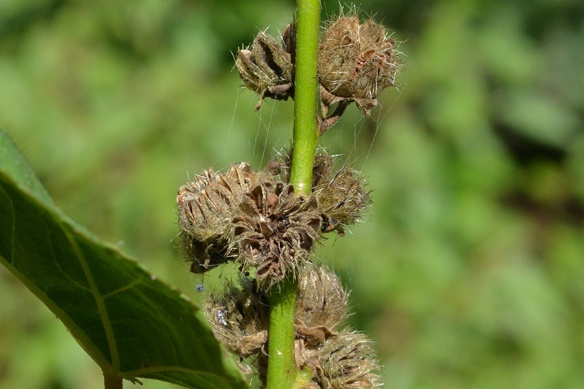 Another plant that responds uniquely to fire is Snowbrush – Ceonothus velutinus. Hikers can see a profusion of Snowbrush along String Lake (below) and on the way to Taggart Lake in Teton National Park.

This evergreen, resinous, sprawling shrub will shoot up new branches from old roots after a light fire. After heavy burns, it can also sprout from “Rip-van-Winkle” seeds.

Flowers blooming almost a century ago produced seeds that have been lying in wait until heat and sun stimulated them to germinate. 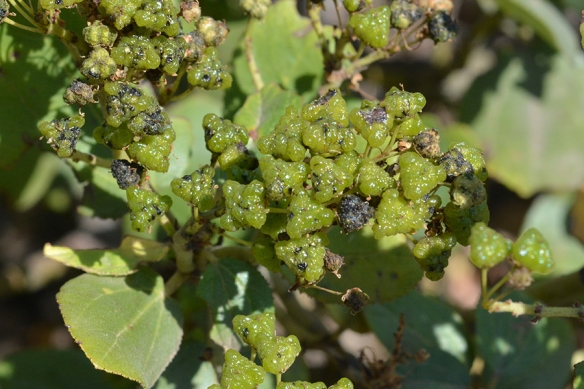 Others report a profusion of White Spiraea – Spiraea betulifolia – blooming (photo below) within the 34,000-acre area of the Cliff Creek Fire, also of 2016.  This appears to be another species is “released” after a fire. 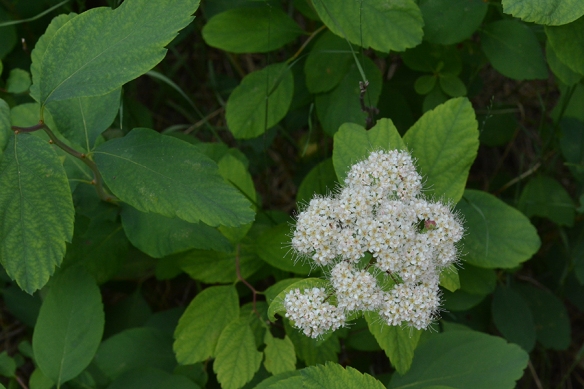 The results of the 20,000+ acre Berry Fire are visible from the Rockefeller Memorial Parkway (photo below) and Grassy Lake Road. The 2016 fire burned fast and hot in some areas forming a mosaic of impact.

Notably, in some areas it burned through lodgepole stands that were recolonizing from a fire only a few years before. Ecologists and foresters are concerned that this unusual short “return” interval will be the pattern of future fires in this era of climate disruption.

Pinegrass – Calamagrostis rubescens – is a tufted, long-leaved grass that rarely blooms. While a common groundcover in the shade of a forest, it usually goes unnoticed by hikers because it is “just a grass.” However, with the stimulus of fire and sun, 2-3’ stalks of delicate flowers shoot up and flourish (photo below). 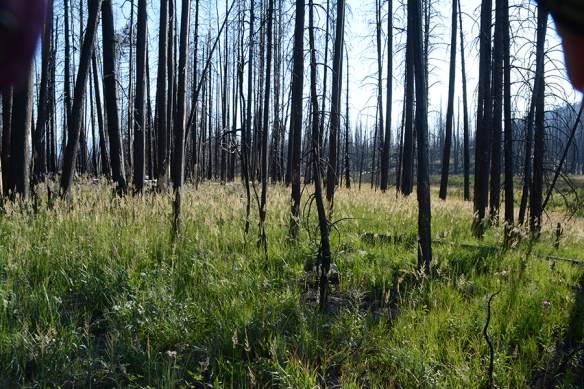 Deep fibrous roots of Pinegrass are important for holding soils, especially when soils are vulnerable to erosion after fires. Plants are blooming in profusion near the parkway.

Fireweed – Epilobium/Chamerion angustifolia – is well known for showing up after fires. In the insulating soil, rhizomatous (underground creeping) stems growing 4-6” deep may have survived the above-ground heat to sprout again. Even one surviving plant can shed 1000s of seeds that can catch upon the wind, land, and germinate quickly on exposed ground. (Photo above shows both Fireweed and Pinegrass.)

Other plants flowering among blackend trunks include several members of the Aster Family which have deep roots and seeds dispersed by wind.

Cheerful patches of Broadleaf Arnica – Arnica latifolia – and a strange hybrid, likely Arnica X diversifolia – a cross between Heartleaf and Broadleaf arnica, are growing in charred soils (photo above). 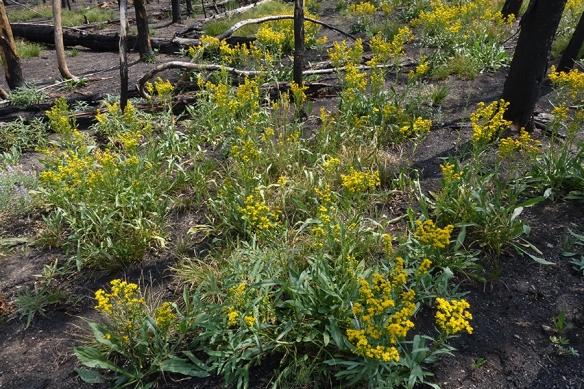 A mix of Yarrow – Achillea millefolium – and Thickstem Aster – Eurybia integrifolia – are common in fields right now, but they are also flourishing in the sun under dead lodgepole pine trees along Grassy Lake Road (photo above).

Silvery Lupine – Lupinus argenteus – seeds are “scarified” by the heat of fire, enabling  buried seeds to germinate relatively quickly.  As a legume, lupines have a mutually beneficial relationship with bacteria in their root nodules that can “fix” nitrogen. This provides lupines an advantage in colonizing poor soils (photo above). Their heavy seeds pop out of their pea-pod like fruits.

A robust member of the Mint Family – Dragonhead – Dracocephalum parviflorum – (photo above) was a new species to this botanist. Apparently it thrives in disturbed soils.

Patches of other common meadow flowers have retained a niche as well, including Oregon Daisy – Erigeron speciosus – (photo above) with its many narrow, lavender ray flowers (ray flowers look like petals). Many perennials have deep storage roots that are often insulated by soils to heat of fire (or the cold of winter.)

It is unclear to this writer how much of the open areas between forest patches of the Berry Fire actually burned, if at all.  (Do you know?) Often meadows don’t provide enough fuel to carry a fire. However, embers often fly across roads, wetlands, and meadow, igniting trees despite the intevening “fire breaks.” In any case, this is what is growing in the meadows.

Common Yampa – Perideridia montana – has created a tapestry of white. Upon a walk through the area, one can see that many late-summer flowers which are common elsewhere as here as well: a hidden layer of Sticky Geranium – Geranium viscossimum, blue spires of Tall Delphinium – Delphinium occidentale, yellow sprays of Cinquefoil – Potentilla spp., orange-yellow Rocky Mountain Golendrod – Solidago multiradiata, and spikes of blue Silvery Lupine mix in.

and elegant spikelets of Oniongrass – Melica spectabilis (photo below):

(Note all the grasses pictured above are in bloom)

These grasses have dense deep roots or bulbs, as in the aptly named Oniongrass (below).

Grasses have evolved to sprout from buds at the base of their leaves – an adaptation to both browsing and fire.

As for wildlife, signs of elk are frequent–they enjoy nutritious grasses. Bears will enjoy the storage roots of yampa come spring—or perhaps pocket gophers, which also eat yampa roots. A week ago, a pair of Sandhill Cranes was walking through the downed trunks, feeding on insects. Black-backed and American Three-toed Woodpeckers seek out burned-over forests as long as the bark remains. Using their chisel-like bills, these woodpeckers feast on insects feeding and breeding under peeling, split bark of weakened or dead trees.

Despite the stark appearance, all is not lost after a wildfire.

Much is being researched and understood about fire ecology.  It is facinating to conduct your own observations.  We have a wonderful opportunity to see the variations in progression at the Berry and Cliff Creek Fires, both of which were started by lightning two years ago.

1 thought on “What Blooms in Wildfire Burns?”