As the valley greens up and we need a respite from the world of Covid-19, many of us are out and about looking for flowers. 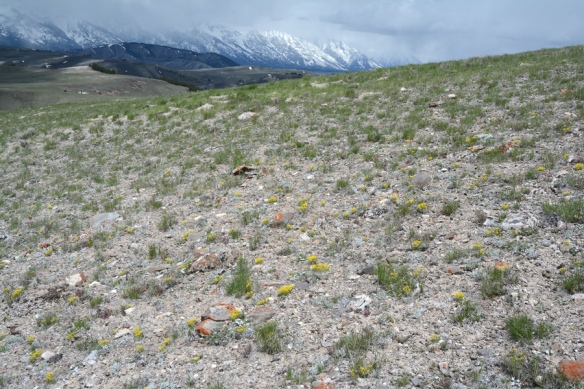 As I write, some of our regular haunts in Grand Teton National Park are still closed (but about to open!).  However, there are many other places for botanical forays.

Bridger-Teton National Forest has various accessible habitats such as more south-facing grassy slopes mixed with sagebrush and dry rocky slopes where the snow melts early.   Josie’s Ridge, Cache Creek, and the lower slopes of Munger Mountain are all good jaunts.  Dry hills to the north and east of Flat Creek Road; Crystal Butte near Jackson; Game Creek south of town; and Poison Creek southeast of Hoback are other accessible points.  Please always respect boundaries and watch your step—many of the plants are small and fragile.

Many common flowers are presented here.   Go to past posts of “What’s in Bloom?” for additional and different details.

Earliest flowers found to the south of Jackson a month ago are now fading but are still visible farther north:

Turkey Peas – Orogenia linearifolia – have the tiniest of white flowers and skimpy linear leaves.  The cluster if often smaller than the size of a penny. 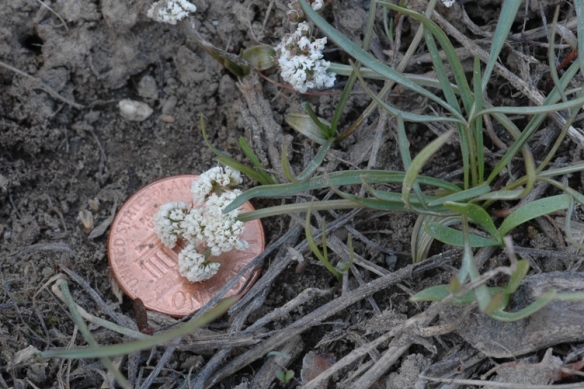 Two early look-alike buttercups perk up the dried grasses:  Sagebrush Buttercups – Ranunculus glaberrimus –  have simple leaves—although when they stretch out they can have two lobes. 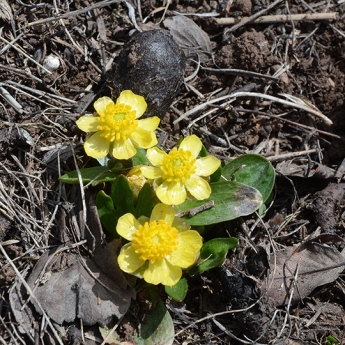 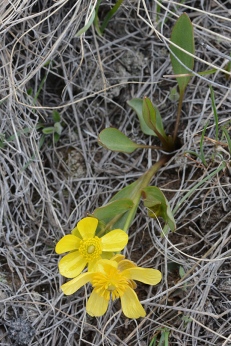 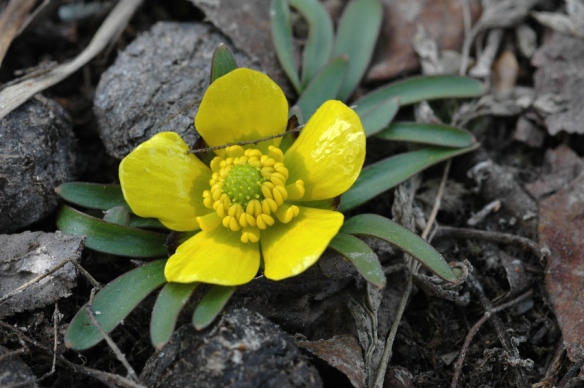 Steer’s-heads – Dicentra uniflora – are easily overlooked until you get the search image of the leaves…then look for the  flowers which have an obvious western motif. 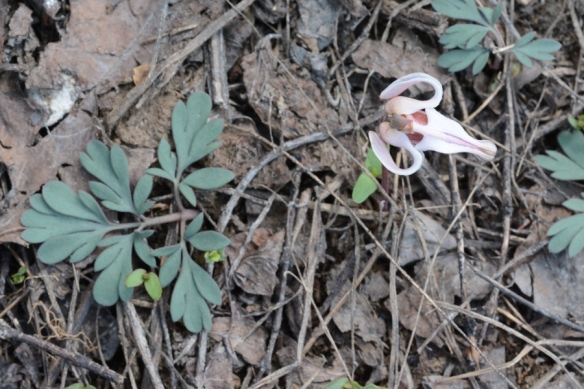 Slightly later or in different locations Spring Beauties – Claytonia lanceolata – are sprinkled about in light shade or sun where snow has just melted. Leaves are opposite, and the flowers are pinkish with delicate, pinker veins that lead pollinators to the center of the flower. 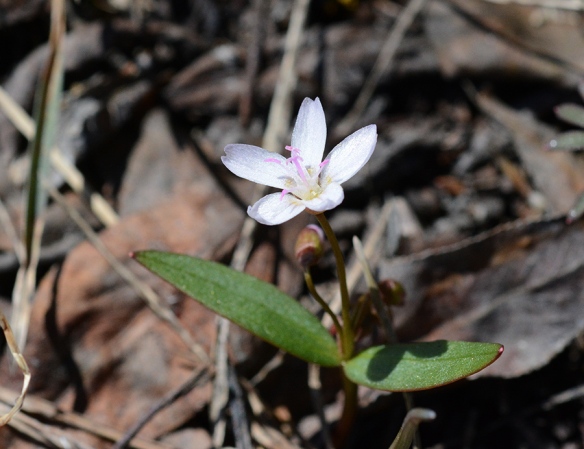 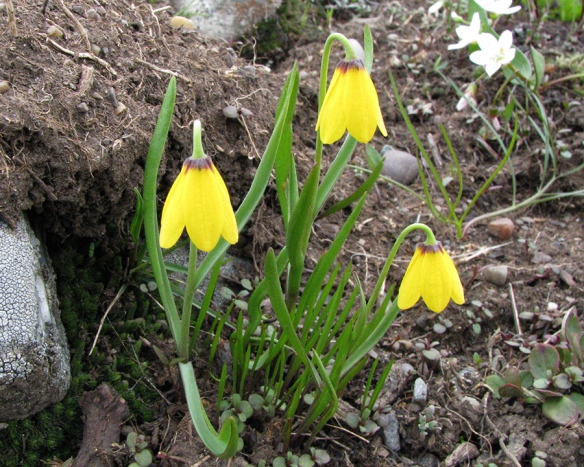 As we move into mid-May, species found on grassy slopes and amidst sage brush include:

Yellow violets – Viola nuttalii varieties – have a range of leaf shapes and sizes which confuse exact identification to variety. 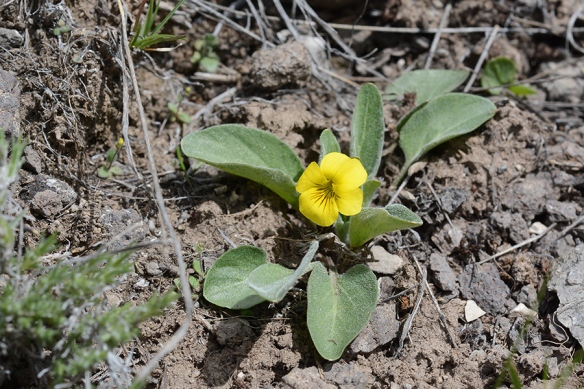 Goosefoot Violet – Viola purpurea – is easy to ID because of its distinctive webbed-foot leaves. 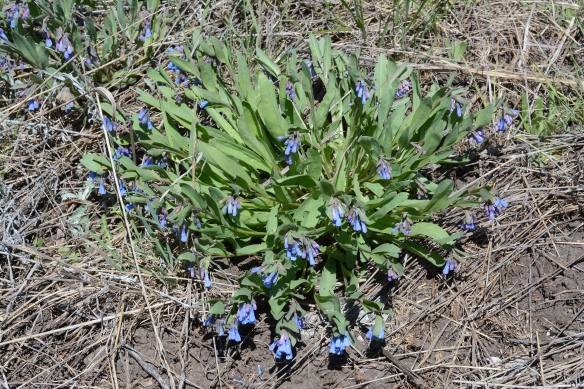 Shooting Star – Dodocatheon conjugens – folds back its petals and has little knobs for bees to cling to—it is “buzz” pollinated. A bee lands, hangs, vibrates its wing muscles and  then pollen grains sift out of the purple anthers and land on the bee’s belly.  The bee flies to another flower with a stigma sticking out which then tags the pollen. 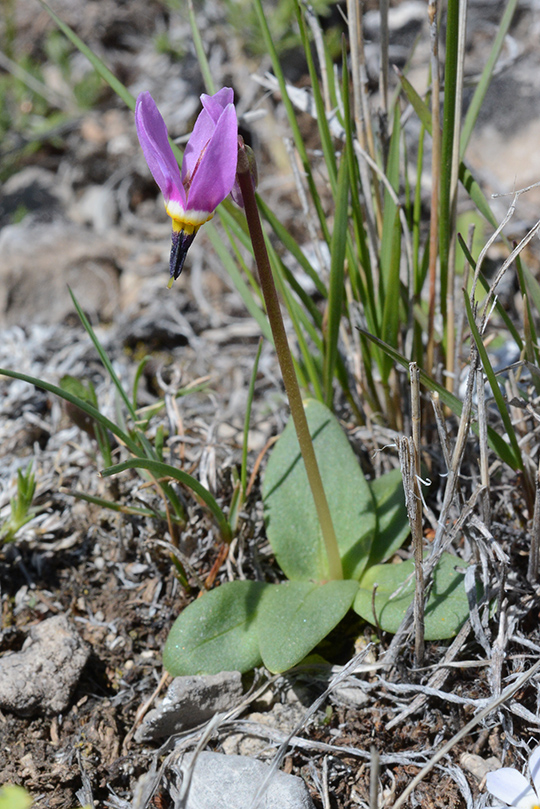 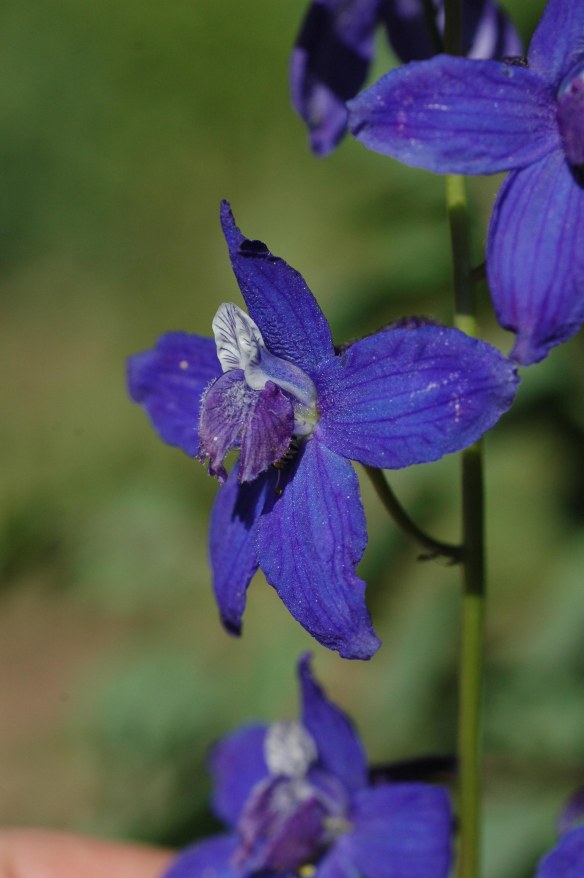 Dry slopes are some of my favorite spring botany spots: 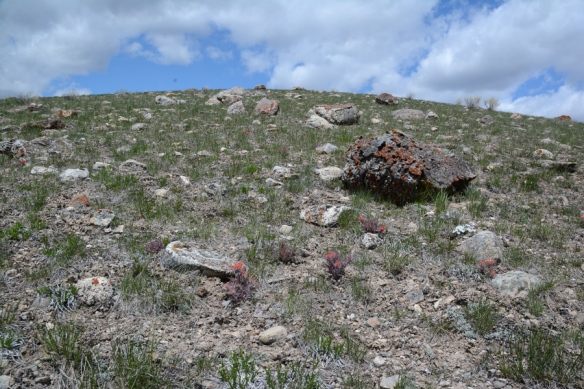 Wonderfully fragrant Hood’s Phlox – Phlox hoodii – has tight needle-like leaves with cobwebby hairs that help distinguish it from the later blooming Multiflora Phlox.  Flowers can range from light to dark blue on different plants of the same species. 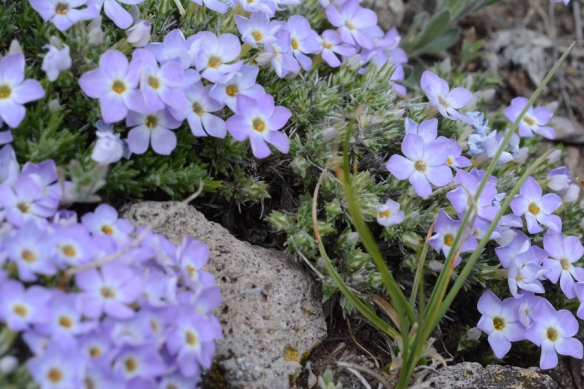 Low pussytoes – Antennaria dimoprha – are often overlooked even when in flower – its tiny composite flowers are all male or female on separate plants.  Flowers are wind pollinated or females can produce seeds without a male around. 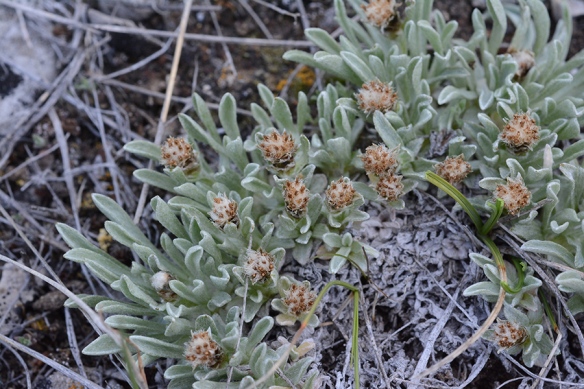 Pursh’s milkvetch – Astragalus purshii – has typical pea-like flowers emerging beyond a clump of compound ladder-like silvery leaves.  The flowers are creamy white. The genus of the Pea Family can be IDed, in part, by the two “wing” petals being longer than the “keel”, which here is purple tipped. 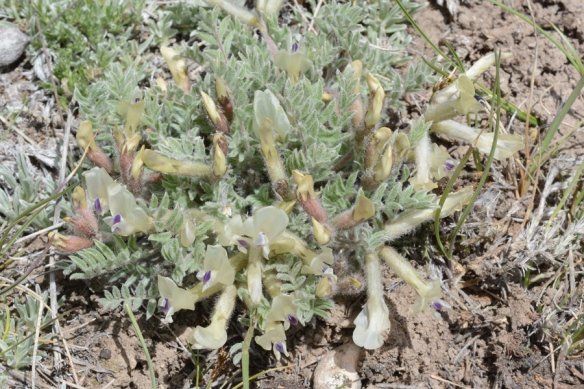 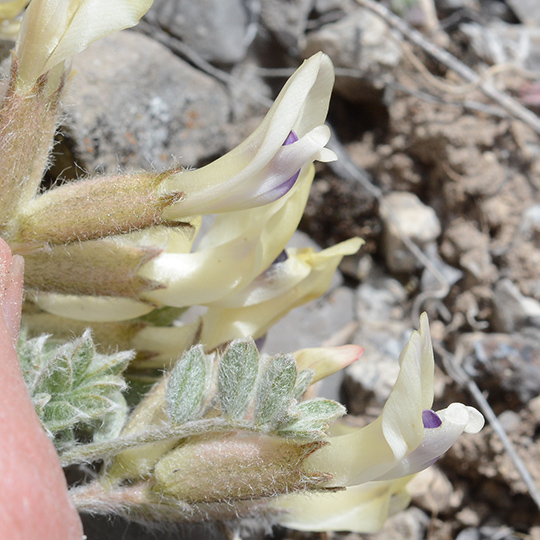 Bessey’s Locoweed – Oxytropus besseyi – has elegant fists of flowers above similar leaves to milkvetch.  The pea-like are very similar (except for its color!); however, the “wing” petals are shorter than the pointy “keel” in this genus of the Pea Family. 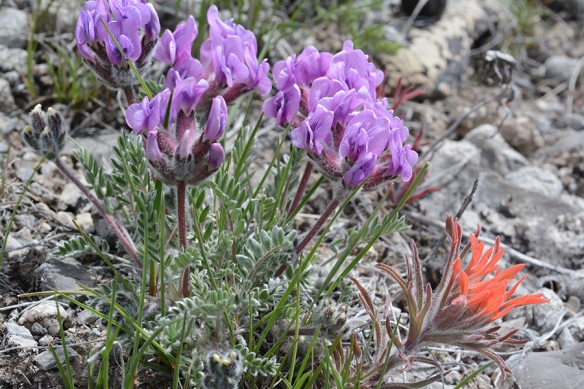 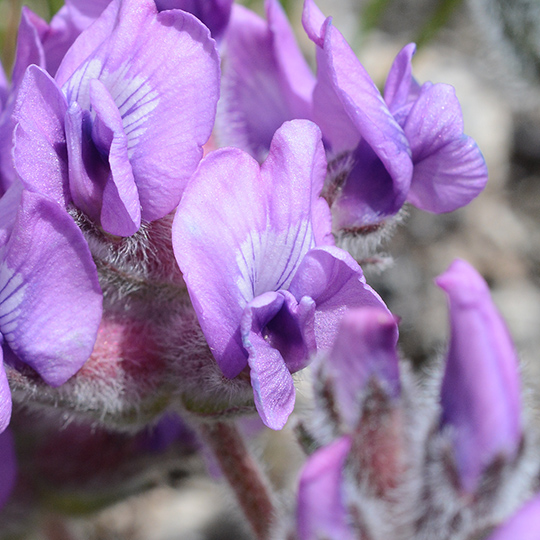 Whitlow Grasses – Draba sp.- were abundant on a very dry slope.  ID of this confusing genus of mustards requires the fruits to ripen.  Hairs also help! 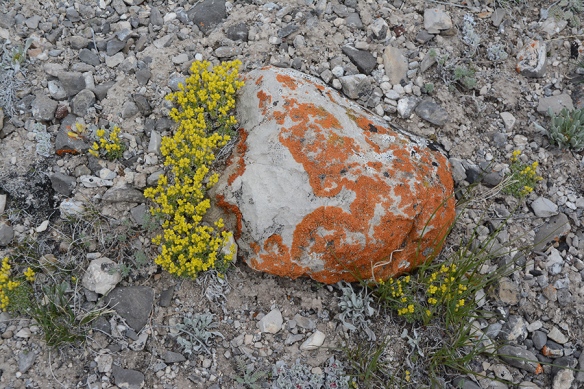 Mountain Rockcress – Boechera sp. – is another Mustard Family member awaiting full ID.  All mustards have 4 sepals, 4 petals, 6 stamens – 2 shorter than the other 4, and a single pistil.  The pistils of the family grow into fruits of various shapes—the key ID feature needed. (photo by Susan Marsh) 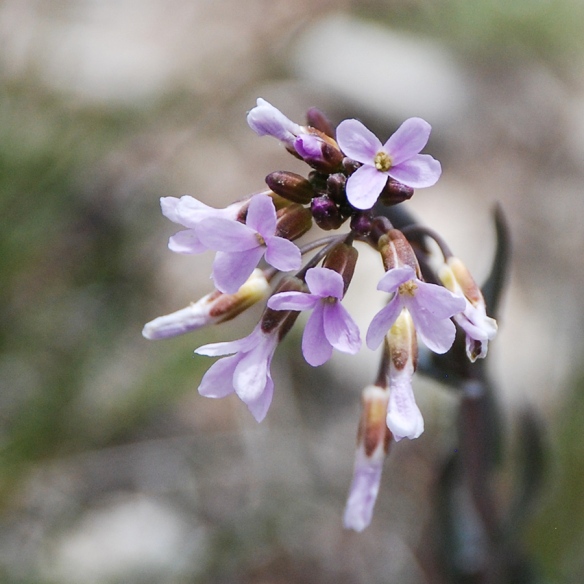 Desert Paintbrush – Castilleja chromosa – is the first of several paintbrushes that will bloom over the next several months.  Its orange-red, day-glow flowers decorate dry hillsides amidst colorful rocks. 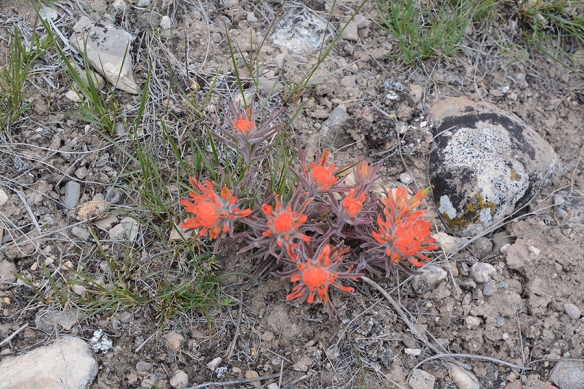 Below are some of the plants, which for some reason, have been given less prominence in past posts—not sure why: 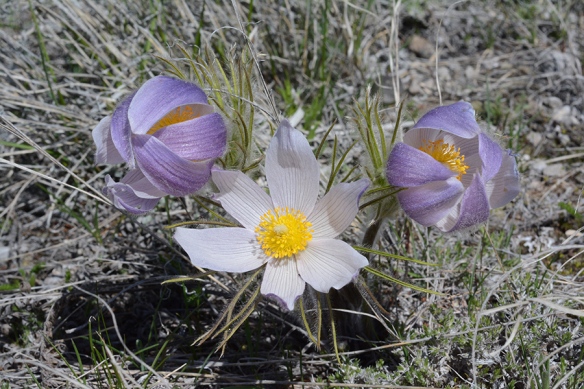 Diamondleaf Saxifrage – Saxifraga rhomboidea – is often overlooked.  The basal rosette of rhomboid leaves gives rise to a single 2-9” stalk with a cluster of several white flowers. 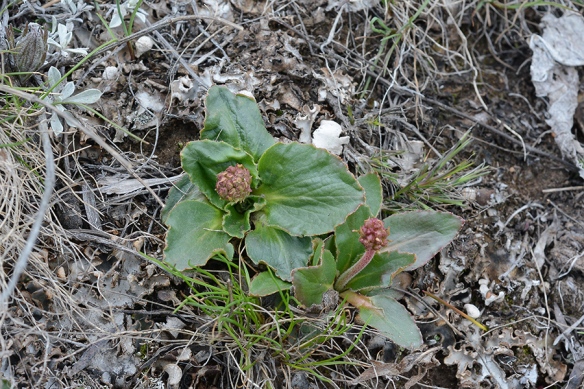 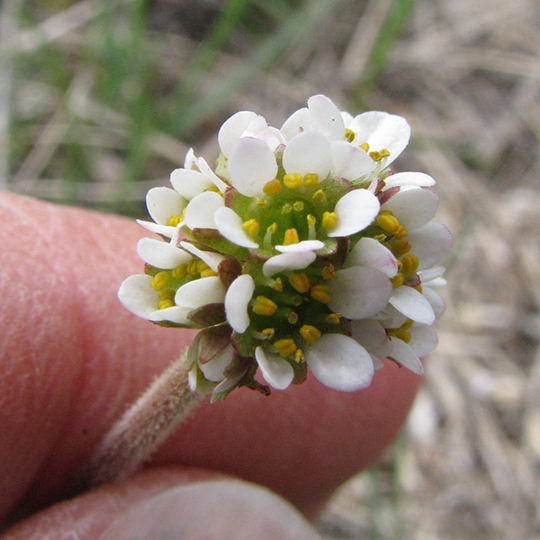 Oregon Grape – Mahonia repens – is common in many habitats, but we often forget to get down and sniff the wonderfully fragrant flowers!  But watch your nose on the spiny, tough evergreen leaves. 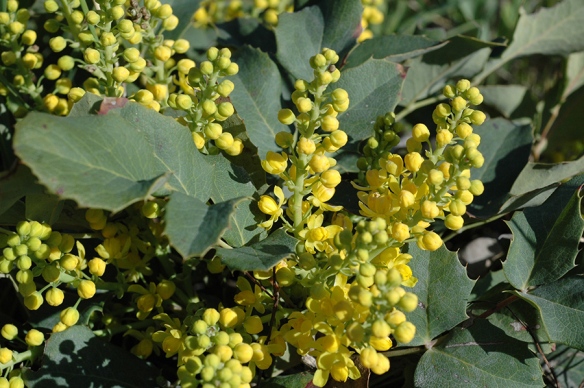 Wyoming Kittentails – Besseya wyomingensis – have no showy petals.  The color comes from the purple-blue stamens that unfold to yield white pollen. 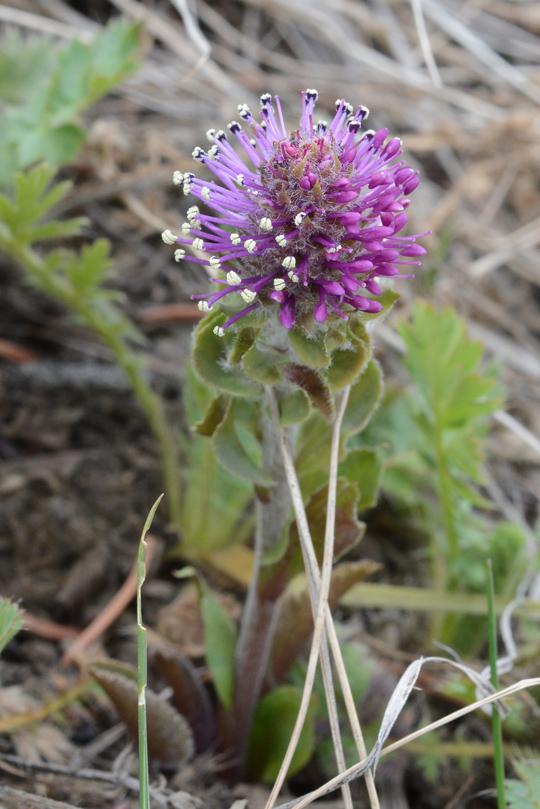 Best to get out now to see these early spring flowers before you are distracted by so many more flowers to come, such as Balsamroot! 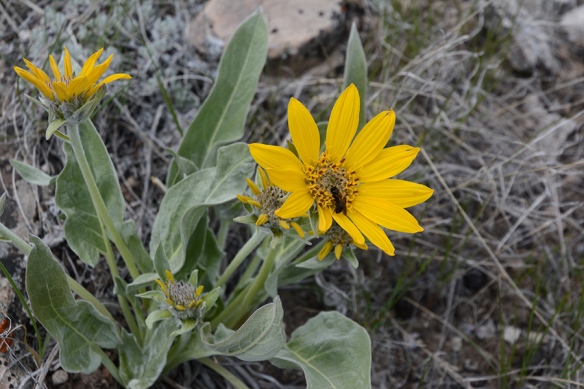 P.S. As always, we appreciate any corrections, suggestions, or other comments!